If you pick up a popular bass fishing magazine, speed boating article, or any boating article that has a strong focus on the more technical aspects of boat engineering, then you’ll eventually come across something mentioning “Jack Plates.”

While the name sounds simple and the functionality is even simpler, jack plates actually work on some very complicated engineering principles.

These small and simple mounting plates play a major role in improving the performance of these high-speed boats and are one of the latest advancements in boating technology.

Many powerboat owners rave about the improvements their jack plates make, but jack plates are much less common on pontoon boats.

In today’s article, we’re going to take a closer look at what jack plates are, how they work, and discuss whether a pontoon boat jack plate is a good idea.

Just a warning- this article may get a bit technical, so you might want to bookmark the page or take some notes to show your buddies the next time you all hit the marina!

What Is A Jack Plate? 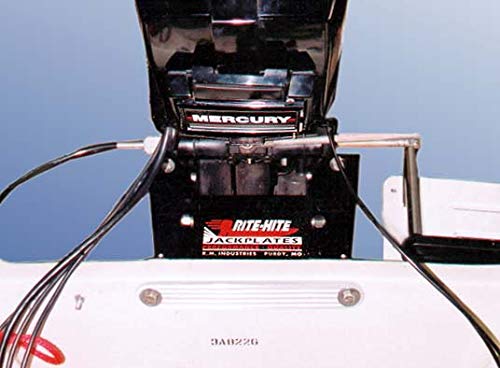 A jack plate is actually a series of small plates bolted together and then bolted to the back of your boat’s hull where the engine is usually mounted. Like a spacer in an automobile, these plates separate your engine and propeller from the hull by a solid 5 to 6 inches.

While this may not sound like much, this small 6-inch distance can make a considerable difference when it comes to your boat’s performance.

Boat owners will typically have the option to select a manually adjustable jack plate or a hydraulic/electric-powered jack plate that can be adjusted from the main driving console. We’ll get into the specifics between manual and hydraulic jacks later, but for now, let’s get into the details on how they work.

How Do Jack Plates Work?

Basically, jack plates allow you to do two things:

For those who don’t care about all of the science bits, jack plates:

By raising the motor closer to the waterline and separating from the aft of your boat by 6 inches, you’ll be able to make the most of your engine’s power.

Since the engine will be pushing the boat at a horizontal angle (as opposed to an angular offset caused by the prop being too far underwater), you’ll often be able to avoid that slow 30-second start-up period where your engine is running at full speed but the hull is still dragging.

This is especially important in competitions such as fishing or racing where you’ll need to make sure that every second is accounted for. 30 seconds can easily be the difference between first place and 4th place. For the competition-level boater, jack plates are pretty much a no-brainer.

Now, for the more scientifically-minded boaters out there, let’s take a minute to discuss the two technical terms listed above- Cavitation and Hull Turbulence.

The easiest way to understand cavitation is by placing your hand in the water and rapidly moving it back and forth. If you pay close attention, you’ll realize that as the forward-moving side of your hand pushes the water, it creates a low-pressure zone on the flip-side of your hand.

You’ll often see bubbles develop here due to the difference in water pressure causing water molecules to turn into a gas. It essentially has an instant boiling effect.

Now, picture the propeller on a boat. It’s going a lot faster than your hand. The faster it spins, the more your wake foams and bubbles.

Cavitation often happens when the mass of your boat’s hull is directly behind the motor. This can create a cavity of low-pressure water that isn’t being propelled at full-speed. This, in turn, means that your boat isn’t going to move or pick up speed quite as fast even if you’ve got the engine running at full throttle.

This is also why you’re taught in boating school to slowly throttle-up instead of trying to jump to maximum speed off the bat. By slowly throttling, you’ll reduce the amount of cavitation and reach higher speeds quicker.

Jack plates can greatly reduce the chance of cavitation by creating a small distance between the mass of your hull and the propeller. Even though the distance is small, it’s often enough to allow you to accelerate to higher speeds with limited resistance.

Hull turbulence happens when your boat is unable to get up on a plane. Getting your boat on a plane is important because it reduced the amount of surface area touch the water, thus reducing turbulence and friction.

By installing a jack plate, you’ll be able to create more speed from the jump, and the offset of your engine will allow you to get up a plane a lot quicker thanks to the reduced turbulence and cavitation.

Is a Pontoon Boat Jack Plate a Good Idea?

So, now that you better understand how jack plates work, it’s time to get back to the question at hand- Is a pontoon boat jack plate a good strategy?

This is a heavily debated question in the boating community, similar to debates over whether or not one should “lift” their trucks or not. Some toon owners are huge advocates for it, others are firmly against it, and some just don’t care.

Let’s approach the question this way:

So everything that we’ve gone over has a lot to do with fast-paced competition boats. We definitely concede and agree that jack plates are an important and beneficial upgrade to powerboats and high-end fishing boats that need extra speed and maneuverability.

Pontoon boats, on the other hand, are designed for cruising, not for speed. Toon boats often have a far lower ratio of engine power to hull mass than your average fishing boat, which might put 500 horsepower on a 20-foot boat.

Conversely, your average 20-foot pontoon boat typically has a 150-horsepower motor or less.

Not exactly designed for speed…

All that being said, a jack plate is relatively safe for pontoons, but in our opinion, they don’t serve much of a purpose and you may end up just wasting a bunch of money for limited gain.

Since pontoons are already raised higher than the water level, raising the motor any more wouldn’t really help much. The only time where jack plates could help your pontoon is by keeping it more level while you’re in shallow water. Just keep in mind this may impact your pontoon boat ladder.

By raising the propeller and creating a more horizontal pushing motion, you would prevent the bow from rising up and the aft from digging into the sand.

One of the biggest reasons why people purchase jack plates for their pontoons is because they begin to realize that their pontoon is losing power or is sinking lower below the waterline than they would like.

The boaters naturally assume that it has something to do with the angle of the motor or added weight on the boat. While these can effect the boat’s speed and buoyancy, the more likely explanation is that you’re getting too much water in your pontoon’s tubes.

Small holes in the tubes can allow a large amount of water into the tubes and greatly increase the weight and lower the profile of the pontoon.

So before you buy an expensive hydraulic jack plate to install on your pontoon, it’s worth your while to check the tubes first for any leaks or unwanted holes. 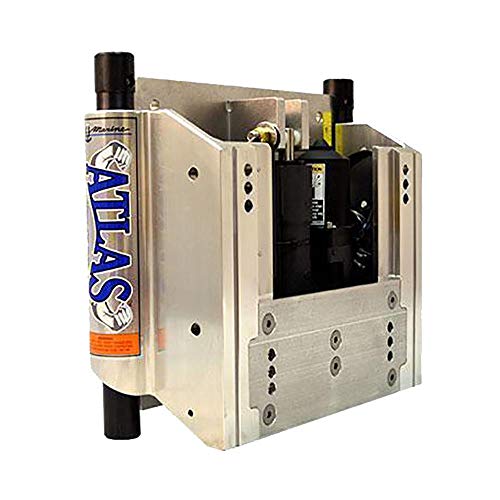 Should you decide to purchase a jack plate for your pontoon, you’ll typically have two choices- manual jack plates and hydraulic jack plates.

Manual jack plates are fairly inexpensive and allow you to twist a couple of bolts to raise and lower the height of your motor.

Hydraulic jack plates, on the other hand, utilize a hydraulic lift system powered by a couple of simple switches that connect to your control center. They work the same way that your normal engine plane switch works, but instead of changing the motor’s angle, they change its height.

Jack plates are a pretty awesome innovation in the boating world and they’re great for fishing and speed rigs. However, we don’t think that they’re a good investment for your pontoon boat. A good quality pontoon boat cover would be a better choice.

While they can help in certain situations, the amount of money that you would invest in a hydraulic jack plate probably wouldn’t be the best way to spend your hard-earned money as it would have little effect on your ‘toon’s ride.