What’s the point of enjoying something if you can’t share it with the people or furry friends that you love most? Doing things with your pets always makes them more rewarding, and that includes aquatic activities. Anyone who owns a dog that swims will tell you how fun it is to enjoy the water’s embrace with their canine companion.

However, what if you want to do a little bit more than just go swimming with your dog? Today, we’re going to take a look at whether or not it’s safe to bring your dog along with you in an inflatable kayak. We’ll cover whether it’s possible in the first place and then take a look at some of the precautions you can take to make it as safe as possible for your four-legged friend.

Is an Inflatable Kayak Dog Safe? Let’s find out!

Is An Inflatable Kayak Dog Safe?

While it’s certainly possible to bring your dog along for the ride when you’re taking to the water on a rigid kayak, is it also possible on an inflatable kayak? Inflatable kayaks tend to be a little more convenient than rigid ones when it comes to transport and storage, but they have a reputation for being a little less durable. No need for a kayak trailer or roof rack!

Since inflatable kayaks can be punctured, most people are wary of bringing their dogs with them on one because of their claws. The assumption is that a dog’s claws can puncture the skin of an inflatable kayak, resulting in a gradual loss of air until your kayak finally sinks.

What most people fail to account for is the impressive degree of durability exhibited by inflatable kayaks. These types of vessels are made of multi-layered PVC (vinyl) which makes them a lot more durable than you would expect them to be. After all, inflatable kayaks have to be durable enough to put up with the day-to-day rigors that they’re exposed to.

What this means is that your typical inflatable kayak will be nowhere near weak enough to get punctured by your dog’s claws unless you’ve taken the time to file them down to a sharp point (which we assume you haven’t).

You can feel free to take your furry companion out to enjoy the serenity of the water with you anytime.

While your dog’s claws won’t puncture your inflatable kayak’s skin, there are a few things that you should keep in mind to ensure that your pet remains safe while you’re on the water.

In this part of our guide, we’re going to discuss the importance of things like a PFD for your dog and how you can train your pet to behave while on the water.

You need to consider your kayak’s weight limit with both you and your dog included. Larger two-person kayaks tend to be more appropriate for dogs than smaller one-person craft.

Most inflatable kayaks have enough weight allowance for a medium-sized person and a small dog, but if you, and/or your dog, are on the bigger end, you’ll definitely need a tandem. 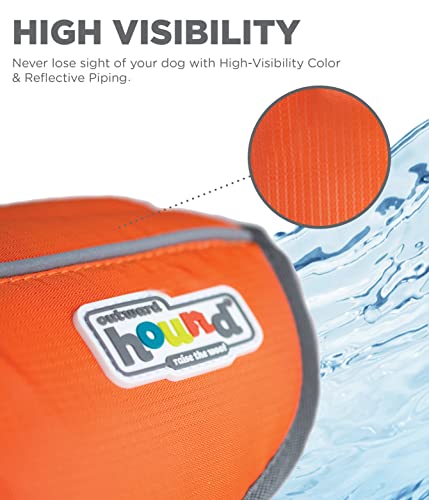 Much like a human being, the most important piece of gear that you can provide your dog before heading out on your inflatable kayak is a PFD (Personal Flotation Device). The Outward Hound PFD shown above is a great choice.

You may be thinking that your dog can swim, so it won’t need a PFD, but even people who can swim should wear PFDs while kayaking.

The reason why even competent swimmers (dogs included) should wear a PFD is because of the variety of things that can go wrong while you’re out on the water. There are certain emergencies where your dog may not be able to swim after being dumped in the water, so keeping your pet safe is a priority.

Your kayak capsizing is one of the biggest risks when you’re out on the water with your dog. Some of the things that can happen (and that can be mitigated with a PFD) include your dog hitting its head and being knocked unconscious, leaving it unable to swim for itself.

Other risks include your dog simply tiring out or cramping during a long swim back to shore, which is entirely possible, and often overlooked by people who don’t see the value in PFDs. A PFD is a one-time expense that could save your pet’s life, so there’s no reason to go without one.

Next, you’ll have to take some time to train your dog to be calm while out on the water. While many dogs may be okay with swimming, that doesn’t necessarily mean that they’ll be comfortable when they’re out on the water in an inflatable kayak. After all, you don’t want your furry friend unexpectedly jumping into the lake.

Inflate your inflatable kayak at home and see if you can convince your dog to come inside of it with you. Get your pet used to the feeling of being inside of the kayak so it isn’t a first-time experience for them when you get to your body of water of choice.

You may have to use treats to coax your dog into getting into the kayak, but when your pet is comfortable with the idea, see if they’ll step inside with you there. Try and get your dog to sit in a designated space where they’ll be out of the way so that you can comfortably paddle at the same time.

This step depends on your dog and how willing it is to listen to you. Some dogs will take to the dry run relatively easily while others will have to be coerced into coming in with treats. Even if you think your dog is perfectly comfortable kayaking with you, it never hurts to do a practice run at home.

The next thing to consider is whether or not your dog will be distracted while you’re out on the water. You know your dog best, so you should know whether or not it will be comfortable to sit in the kayak and enjoy the scenery or if it will jump into the water when it sees its first bird or wild animal.

If your dog is prone to jumping at distractions, then you’ll likely want to bring along some dog treats or a toy that you know will attract their attention. Also, practice commands with your dog if you haven’t, as that will make it easier to keep your dog under control when possible distractions pop up.

The best way to ensure that your dog remains calm while you’re on the water is to bring something like a toy or some treats to ensure that it can relax. However, there are other ways to keep your canine companion happy and stop it from getting overexcited while you’re in the kayak.

Bringing something like your dog’s favorite sleeping pad with you can ensure that it has somewhere to rest and remain calm instead of letting all of its pent-up energy get the best of it. Keep in mind that the sleeping pad should be waterproof, as you can expect it to get wet, especially if your dog jumps in the water.

What Kind of Inflatable Kayak is Best for My Dog?

The next thing you’ll have to consider is the ideal kind of inflatable kayak you can purchase if you plan on bringing your canine companion along with you. The way we see it, there are two options that should work best when bringing along a dog: inflatable tandem kayaks and inflatable fishing kayaks. 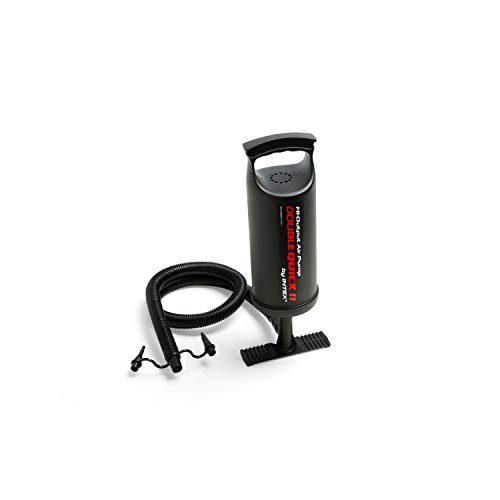 One of the more popular choices, especially for families and couples, is a tandem, or two-person inflatable kayak. Tandem kayaks are designed for two (or more) people, and their larger size makes them perfect for bringing along a furry friend with you.

In fact, some tandem kayaks even have a seating area in the middle that’s designed for children or pets that you decide to bring along with you. This ensures that your dog won’t get in the way when you’re paddling, and it gives your pet a comfortable place to sit.

The only downside to the tandem kayak is that it will be a lot more difficult to control on your own if you want to head out on the water with just your canine companion (though it is possible). See our article on paddling a tandem kayak solo for more information on how to do this.

The other option is an inflatable fishing kayak, as they tend to have a bit more storage room so that you can keep your gear and catches with you. With a little bit of effort, you can repurpose this extra space into room for your furry friend, ensuring that it’ll be more comfortable than in a standard solo inflatable kayak.

As long as you follow the precautions that we’ve outlined in this guide, you shouldn’t have any trouble bringing your dog out on the water with you on an inflatable kayak. We hope that this guide has helped you out and we wish you (and your four-legged friend) a good time out on the water. 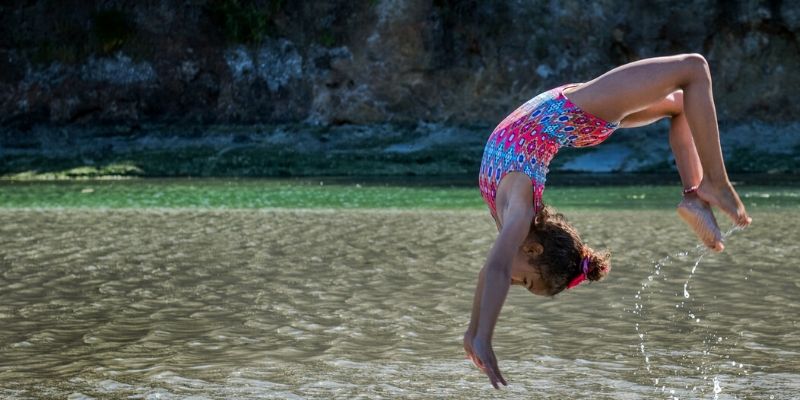