Kayaking is one of the pastimes that makes life worth living. Spending your time out on the water, regardless of whether you’re on a fishing kayak or just kayaking for sport, allows you to take a moment to escape the hustle and bustle of day to day life and just enjoy the sounds of nature.

The problem with kayaks is managing the kayak out of the water. Transport and storage, ugh.

Hardshell kayaks are a pain to get on and off a car’s roof rack, awkward to store, and difficult to trailer. Yeah, Inflatable kayaks are a decent option, but they track differently than hard shells. You also have to mess with inflation and deflation. And they just don’t look as cool.

Folding kayaks are an interesting third option. These kayaks are hardshell, but they fold up like origami for convenient transport and storage. In today’s guide, we’re going to take a look at folding kayaks and figure out whether or not they’re worth your money. Are Folding Kayaks Any Good? Let’s find out!

Are Folding Kayaks Any Good?

Here’s a short video from Oru Kayaks, the originator of the folding kayak, that shows how they work.

Since a rigid hull can more efficiently cut through the water, folding kayaks will feature the same acceleration and top speed as rigid kayaks, meaning you’ll have to expend less effort than you would with an inflatable model.

Another similarity between rigid and folding kayaks is their level of durability. Since they’re typically made of fiberglass or lightweight plastics, these kayaks tend to be relatively durable compared to inflatable models that are made out of thick layers of PVC.

Plus, folding kayaks look really cool. They are sold in the SF Museum of Modern Art, after all.

However, some of the crucial differences between folding and rigid kayaks include the difference in portability. A folding kayak will be as easy to transport as an inflatable kayak. It folds up into a portable suitcase shape that one person can easily handle.

This means you won’t need help getting your kayak out of the water. 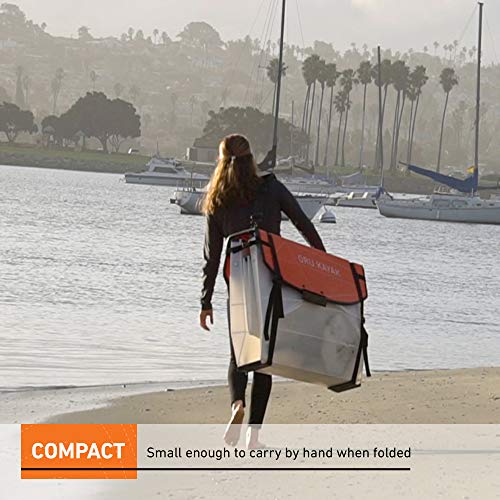 There are a few key benefits to folding kayaks, but most of the advantages are centered on the superior level of portability they provide you with. As an additional benefit, folding kayaks are a lot easier to store in smaller areas, and they have a few crucial advantages over their inflatable counterparts. 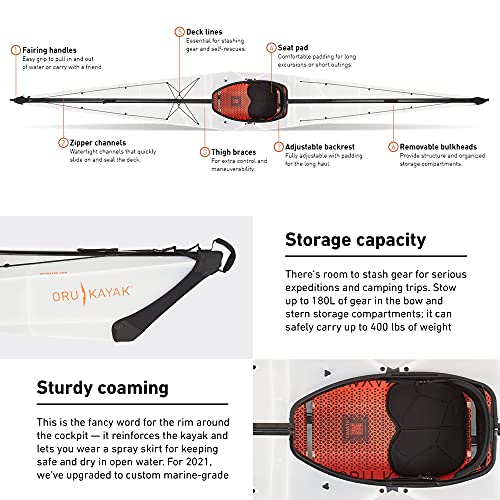 The main reason why most people opt for folding kayaks is that they are much more portable than rigid kayaks. Transporting a rigid kayak to the water can often be a challenge, especially if you don’t have someone else to help you carry it. Finding a vehicle to transport your kayak can be another challenge.

For a full-sized kayak, you’ll typically need a vehicle with carrying racks on top of it so that you can safely transport your kayak to the water. When using a folding kayak, you can simply fold it up and fit it in either the trunk or back seat of your car, so bringing it to the lake or river is far easier.

Most folding kayaks pack up into a carrying container, either included with the kayak itself or the kayak transforms into its own container, ensuring that there is no separate bag that you can lose.

In fact, you may not even need a vehicle to transport your folding kayak to the water. Since they turn into easily-transported bags, most of them can be carried on public transit without any trouble. Whether or not this is feasible depends on how much gear you have and how far from your nearest body of water you live.

All of this comes together to make folding kayaks much more comfortable to carry back and forth to your waterway of choice.

Along with being easier to transport, folding kayaks also won’t give you as much trouble when you’re done using them and ready to store them. Even if you live in a house with plenty of space, a folding kayak can save you some room in the garage or in the backyard.

People who live in apartments may not even be able to fit a full-sized rigid kayak in their dwelling. The ability to make your kayak more compact without sacrificing its performance is a massive benefit. You’ll be able to bring your kayak indoors without worrying about it scraping against the walls when you turn around!

As an added advantage, you won’t have to procure a storage bag for your kayak, as most folding kayaks already come with one. A storage bag can prevent environmental factors from damaging your kayak when you store it either indoors or outdoors, but they’re especially crucial for outdoor storage.

Even better, you won’t have to invest in storage racks for your kayak. You can simply store a folding kayak in the closet or in a corner of your garage without it taking up too much space.

This will save you some money, offsetting the typically higher cost of a folding kayak. 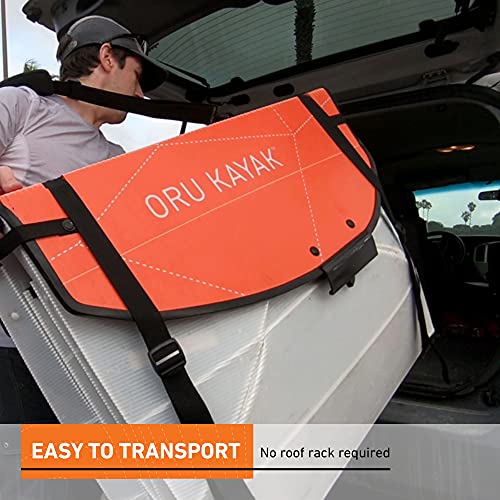 Folding kayaks have a few crucial advantages over inflatable kayaks, so they might be the best kind of kayak for someone looking for the best in portability. Compared to their inflatable counterparts, folding kayaks are much more durable. Their rigid skin can’t be easily damaged.

Folding kayaks also tend to have better safety features than inflatable kayaks. They’re designed to float even if they end up sustaining critical damage. If you use your kayak for more rigorous activities but you don’t want to sacrifice your performance, folding kayaks offer an excellent compromise between inflatable and rigid models. Note that you should still wear a kayak pfd while kayaking.

Of course, folding kayaks aren’t all advantages. There are a few key downsides that you’ll have to consider before getting your hands on a folding kayak variant. Some of these downsides include a relative lack of durability compared to fixed kayaks, a loss of stability, and a higher cost.

While folding kayaks may be more durable than inflatable kayaks, they still can’t match rigid-hulled models. This is because the seams where folding kayaks fold in half tend to be weak points that can eventually start leaking with repeated use, especially if they sustain damage in the area.

To ensure that your folding kayak lasts for as long as possible, you’ll have to take care of the joints where the kayak folds. Always ensure that you’re careful when assembling or disassembling your kayak, and if you hit anything, take a close look at the area for any damage.

Since folding kayaks require a rather specific design so that they can fold, their hull shape typically makes them a little less stable than rigid kayaks. If you’re going to use your folding kayak for casual paddling, you typically won’t have any problems with this lack of stability.

However, if you intend to use your folding kayak for more intense activities where you can expect your balance to be upset, you’ll probably have some issues with folding kayaks’ stability.

Folding kayaks are in their infancy. There are only a couple of brands on the market so far, and there are only a few options. If you want a fishing kayak, a two-person kayak, etc., you may not be able to find the right folding kayak for your needs right now. But more options are likely coming in the future.

The final thing to consider is the higher cost of folding kayaks relative to both rigid and inflatable kayaks. Keep in mind that folding kayaks are still a relatively recent innovation, so you’re essentially paying for all of the research and development that goes into them when you purchase one.

Along with considering whether folding kayaks are worth it in the first place, we’re also going to take a look at two of the top folding kayaks on the market in this part of our guide. These include the Oru Foldable Kayak (which is the most recognizable of the two) and the Tucktec 2020 Foldable Kayak. 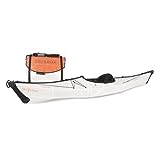 The Oru Foldable Kayak is the best-known product in the foldable kayak category, and its build quality matches its reputation. This folding kayak is designed to be easier to use than the prototype folding kayaks that preceded it, ensuring that any kayaker can use it and enjoy it with ease.

While Oru advertises their foldable kayak as being easy to assemble in five minutes, it will typically take you about an hour unless you’ve already assembled it before. What you can do in five minutes is fold or unfold it, so that may just be a mistake in Oru’s wording describing the product.

Since this kayak only weighs about 20 pounds, you can easily transport it wherever you need to go. Better yet, the Oru breaks down into a carry case, so you won’t need to bring along a separate carry bag wherever you go. The downside is that it will get your car or back wet if the kayak is still wet.

One of the main advantages of the Oru kayak over other folding models is that it offers much-improved performance over its counterparts. While it doesn’t quite stand up to the performance of a dedicated rigid-hulled Kayak, the Oru provides an immense performance improvement over similarly-priced inflatable models. 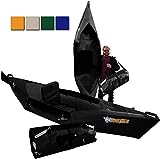 The Tucktec 2020 folding kayak is an impressive alternative to the Oru, and while it may be a little worse-known than its counterpart, it has a few key features that improve on it. One of the more notable differences is the lack of any open seams lower than the top level of the Tucktec kayak.

While some Oru owners have complained that the seams opened up on their kayak after extended use, this is simply impossible with the Tucktec kayak due to its very design. This model also exceeds the US Coast Guard’s safety standards for both kayaks and boats.

For additional safety, the Tucktec kayak is designed to float, even if it’s filled with water. This means that you can safely make it back to shore, even if you end up holing your kayak. The buoyancy is further improved by the inclusion of high-density closed-cell foam along the sides of the Tucktec kayak.

When it comes to performance, we were impressed by the improved stability of the Tucktec kayak, largely due to the design of the flat bottom. Overall, this model may not be as well-known as the Oru kayak, but it features better durability and improved safety features in exchange for being a little bit less user-friendly.

Folding kayaks may still be in their infancy compared to rigid and inflatable kayaks, but they are certainly promising. If you’re not willing to deal with a few teething issues, we’d recommend passing up on them for the time being, but if you can benefit from their exclusive features, you may as well pull the trigger on one of them.