Successful fish finders not only find the fish, but they make you aware of your surroundings, where you’ve been, where you’re going, and make it easy to do all of that in the process. Technology has allowed them to categorically become more advanced and feature packed, although many still lag behind.

In this article, we review five of the best Fish Finders under $200 to showcase which can make for better fishing trips for family and friends. We’ll start with the Best Fish Finder Under $200, the Garmin Striker 4. 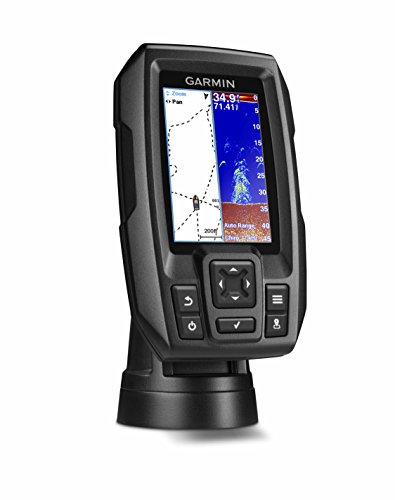 After reviewing the available fish finders, we determined that the Garmin Striker 4 was among the best in the category. With CHIRP sonar, simple dedicated buttons, a Waypoint Map, a color display, and up to 1600 ft of use in freshwater, it’s unparalleled in functionality – which is the main consideration when comparing different fish finders.

In comes in at a very affordable price range, and while not being the most budget option (that will go out to the hand held fish finder by LUCKY), it’s still very much within reason for what this piece offers.

For more information on the Striker 4, see the Product Reviews section below.

Runner Up Fish Finder Under $200 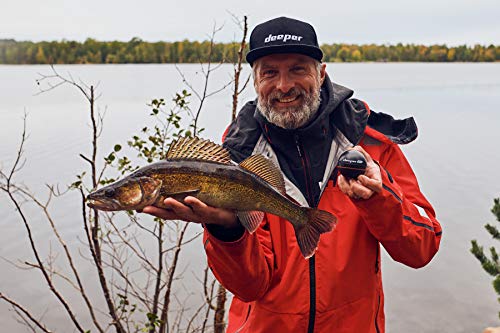 For those that find CHIRP isn’t a complete necessity, you would do well with the Deeper Pro+ Smart Sonar fish finder. The Deeper Pro+ runs off of dual-beam sonar but includes GPS, allowing it to achieve a similar functionality to CHIRP systems.

It can sync to a phone or tablet, along with Deeper’s systems like Lake Book, to get a full view of the data you have on your specific body of water (combining previous maps with your current information you’ve gleaned).

Like the Striker 4, it is easy to setup and works well. 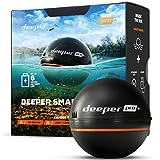 For further details on the Deeper PRO+, see the Product Reviews below.

What Does CHIRP Mean on a Fish Finder?

CHIRP stands for Compressed High Intensity Radar Pulse. It is a sonar system developed by the Navy to provide a more accurage signal. CHIRP systems transmit a long, sweeping pulse that provides more information than a “ping”-style sonar system.

What Does CHIRP Do on a Fish Finder?

CHIRP systems generally provide more refined fish data than non-CHIRP sonars. You can get more clarity with CHIRP, and instead of seeing a blob where some fish are, you can actually see the individual fish in the image.

Is CHIRP Better than Sonar?

CHIRP sonar offers better resolution than old-style sonar, and is capable of more clearly identifying discrete objects in the water.

Is CHIRP Worth the Extra Money?

Most of the time, it is. CHIRP Sonar gives better resolution, and fish finders that use CHIRP technology give anglers a better picture of what’s going on under the boat. But of course, there is a tradeoff between price and required accuracy.

In this section, we’ll start with a comparison table to get oriented. Then we’ll dive into the individual product reviews. 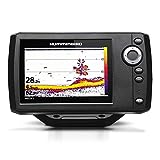 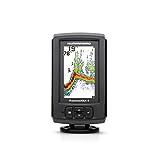 Striker 4 with Transducer by Garmin 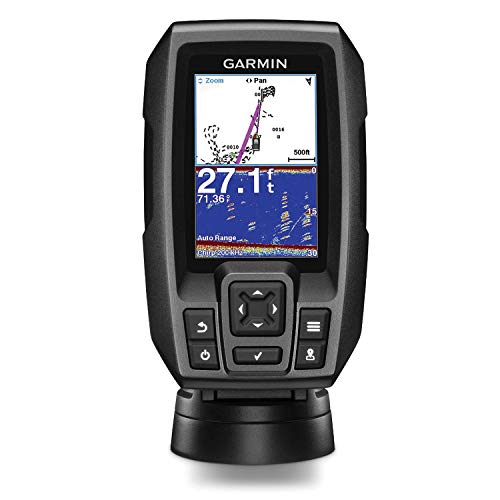 Many people may be familiar with the name Garmin, as their GPS technology spans across a wide variety of markets, including for marine uses like fish finders. Their Striker 4 fish finder sets the standard for fish finders under $200 (and in fact, we considered it the Best Fish Finder under $300, as well!).

For this specific fish finder from Garmin, the most important feature is the presence of CHIRP, which not all fish finders in this price range will carry. CHIRP modifies the pulses that are sent by your transducer, which results in a higher level of clarity and detail. It’s beneficial and an upgrade for any fish finder that includes it.

As for the device itself, the buttons are intuitive and make it easy to use. One key feature is the Waypoint Map, which allows you to mark locations, allowing you to see your location relative to them as well as return to them in the future. Overall, it should just make life easier when it comes to navigating. Many of the smaller features included can do so as well, like the bearing to waypoint, water temperature, distance to waypoint, and so forth.

The system is quite portable as well. For its battery, there is a sealed, rechargeable battery built in with a charger. There is a suction cup for mounting as well as a float – making it useful for other uses beyond just your boat, like on a kayak or ice fishing.

For its price range, name brand, and generous features, it’s hard to go wrong with the Striker 4 fish finder from Garmin. It has many of the advanced features that you would want from a fish finder, including CHIRP! The Striker 4 is the Best Fish Finder Under $200.

Upon first look at this fish finder, you’ll find a bundle of features that will come in extra handy: water depth, weeds, fish location, and whether the bottom is sandy or rocky.

Some of the most common questions when considering the LUCKY handheld fish finder are:

Where do you mount the fish finder? Does it work for bank fishing? Does it show the size of the fish?

First, most people, they will want to mount on the side of the kayak or boat which is key for allowing it to touch the water perform as needed. It is also great for bank fishing because there is a 30’ cord, which is just about what you’ll need to get the full view of things (but it may be more difficult than on a boat to get it exactly where you want).

And lastly, this model does not show the size of the fish, which is likely due to its cheaper price range and lack of CHIRP.

Even though we’re looking at relatively inexpensive fish finders for under $200, this is an ultra-budget option that is perfect for the casual fisher. For someone that only goes out a couple of times per season and believes in the old saying “something is better than nothing”, then this fish finder by LUCKY will do the trick. 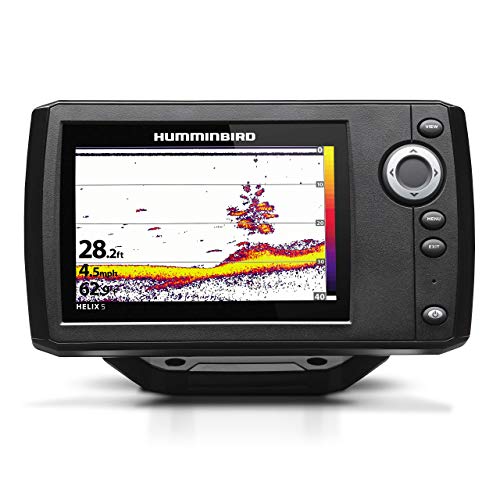 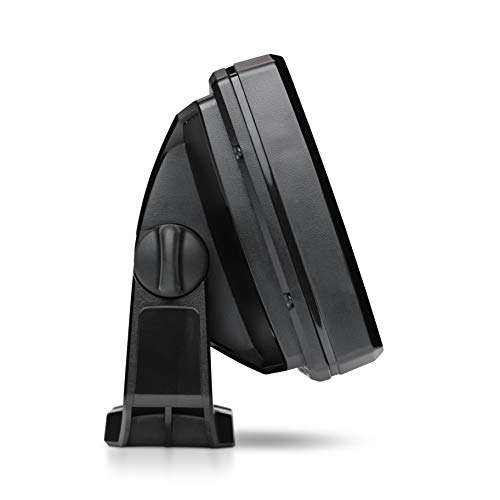 The Helix 5 by Humminbird is one of the more crisp fish finders in the price range and is featured loaded.

To start, let’s talk about the visuals.

For people that put more stock into the display of a fish finder, the Helix 5 is one of your best options. With a WVGA colorized display, it is a serious upgrade from the LUCKY fish finder and still better than the Striker 4. Like the Striker 4, it has CHIRP sonar. The imaging sonar can show the lake bottom, GPS mapping, and AutoChart Live (which is a real-time mapping of the water).

Built-in to the Helix 5 is data directly from NOAA and LakeMaster, which gives you maps with a clear view of underwater terrain straight out of the box. This can help you navigate waters when it’s your first time on a new body using this fish finder.

Other smaller features include side and down imaging, real-time sonar, upgradeable software, temperature alarm, freeze alarm, and instant image update.

Unlike the other fish finders so far, the transducer, mounting hardware, and mounting bracket are included.

While it comes in as a pricier option than the two fish finders we’ve reviewed so far, it certainly has upside that justifies that. One great feature is the inclusion of a Memory SD slot. This allows you to keep extended data, especially for specific bodies of water that you visit.

If you need all of the features along with a fish finder that just does its primary job well, then it is hard to go wrong with the Helix 5. 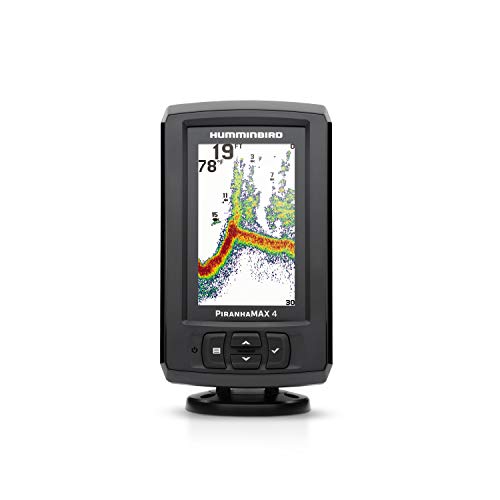 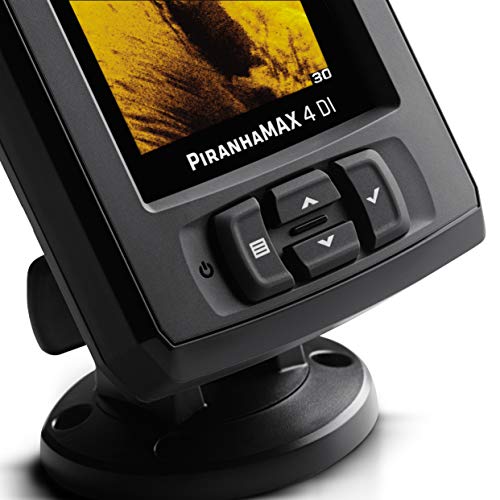 Unlike Humminbird’s Helix 5, the PirahnaMAX 4 is a lower-tier option – with the biggest difference being that compared to the first three, it does not have CHIRP sonar. This limits its GPS capabilities and may lead to it not being as accurate as some of the others.

But that doesn’t mean it’s all gloom for the PirahnaMAX.

Although there’s no CHIRP, there is dual-beam sonar, which allows you to switch between a narrow and accurate field of vision or a wide beam for a more generous coverage area. With this, you’ll be able to identify not only fish, but also brush and contours.

The biggest downside is that the transducer’s accuracy can come into question at times, with one review noting that it was only good for down to 35’ in water.

The PirahnaMAX is a reasonable budget option, but similar to others in this price range, it lacks CHIRP sonar which can limit just how effective it is at doing its job. The upside comes in the form of its display, which is 4.3 inches, along with a simple 4-button system for using it. 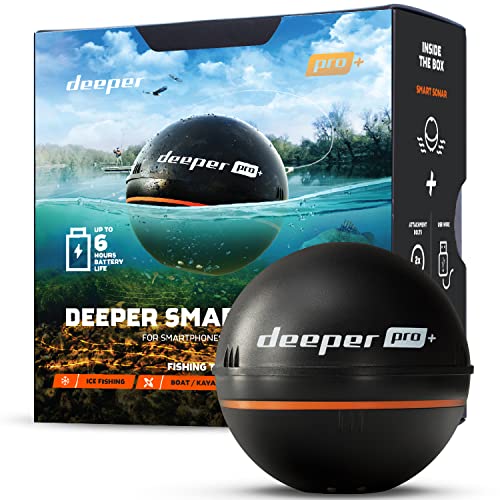 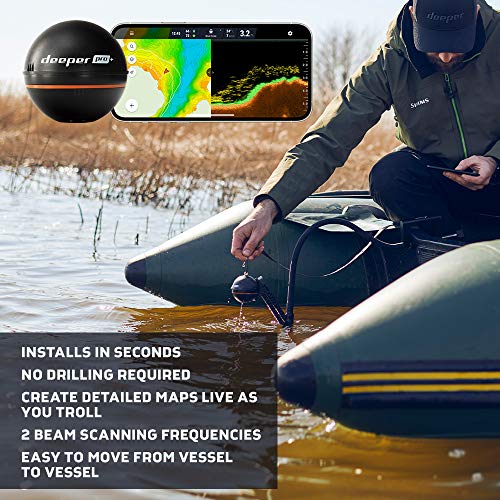 Unlike other Deeper PRO models, its worth noting that this one, in particular, doesn’t have CHIRP. This puts it in the category along with the LUCKY fish finder and the PirahnaMAX, despite it being a more expensive option.

Instead, it relies on dual-beam sonar with 90/290 kHz frequency. That said, it is the best of the non-CHIRP options we’ve looked at so far. (Note: Deeper sells a CHIRP+ model, but it is well outside of the price target we’re looking at in this article).

The inbuilt GPS is the primary factor for being so. It allows you to create bathymetric maps, even from the shore, and allow you to save it to Lake Book – which is Deeper’s management platform where you can organize and manage all of your maps, even from home.

For a non-CHIRP option, it does function quite well as it can scan down to depths of 260 feet.

Functionally, it is among the easiest to use: just cast it out and you’ll get instant depth and temperature readings. It latches onto the side of a boat, canoe, or fishing kayak easily. It lets you monitor fish, get a view of the floor, and more.

Having access to a platform (in this case, Lakebook) where you can save your maps and revisit olds ones is appealing, especially for the fishermen (or woman!) who returns to spots frequently.

For a non-CHIRP fish finder, the inclusion of GPS helps to mitigate some of the losses that come from not having top-of-the-line sensing. Overall this functions as a high-quality fish finder.

While technology has come far, many fish finders (especially under $200) can still rely on outdated features or displays. These five are the best from the category and can offer a wide variety of up-to-date features, from CHIRP-sonar to dual-beam, bathymetric mapping systems, phone syncing capabilities, databases, and more.

Overall, we’d say it’s pretty hard to go wrong with the Garmin Striker 4, which is the most popular option of the bunch. The combination of the Waypoint Map and CHIRP sonar in tandem allows it to do take care of many of the basic needs that one looks for besides just finding the fish. Dedicated buttons and a simple interface make it easy to use as well.

Humminbird’s Helix 5 came in as the most feature-packed and advanced fish finder of the group while the Deeper PRO+ Smart Sonar was the most versatile for a non-CHIRP option.